The surface water temperature is an important factor in water quality, driving several biochemical and other processes. The spatial resolution of thermal images from space by satellites are usually to coarse to apply to small surface water bodies. Using Unmanned Aerial Vehicles (UAVs), this problem can be solved.

It is possible to mount different camera systems on UAVs. Measurements with thermal cameras can be mounted to give in an indication of temperature and its spatial pattern. Because thermal wavelengths are more to the end of the light spectrum, the wavelengths are long and contain less energy than those in the visible spectrum. Because of this low energy, it is difficult to measure temperature with satellites with a high resolution as the lightwaves have to travel a long distance. With UAVs, and to lesser extend airplanes, this distance is much smaller, making UAVs and airplanes mounted with a thermal camera efficient and accurate monitoring tools.

The result of a test flight mid June 2015, by Wageningen University students of the Laboratory of Geo-information Science and Remote Sensing, using an UAV with a thermal camera mounted, proves the feasibility of this method. The figure below shows the measured temperature pattern. It indicates in this case that the spatial variation in the pond is rather small, as the surface water temperature is rather homogeneously distributed across the pond. As the variation of temperature in the surrounding vegetation is visible, large temperature difference in the water body would also have been visible when present. 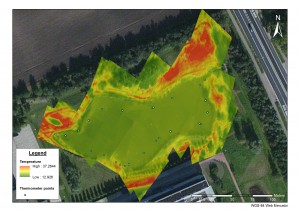 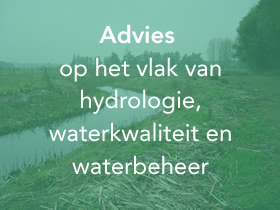 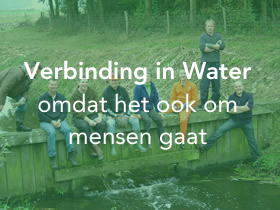