Objective: to demonstrate the strength of the Dutch consortium partners in solving serious water problems, in collaboration with the Chinese counterparts, by enhancing green water management by farmers to increase upstream and downstream water productivity. The derived objectives are:

Green Water Management & Credits is a concept that allows quantification of water supply and demand, erosion reduction, yield increase, sedimentation amounts, and hydropower production. These are needed to calculate the economic costs and benefits of environmental protection measures. In order to run this concept in areas, an analytical toolkit in combination with adequate database resources and knowhow is necessary. The project aims at future business cases for the partners involved, using the GWM&C concept and toolkit. We are working closely with local/regional partners in China: CWRC, CWRPI, Huazhong Agricultural University, and North West Agricultural & Forest University.

In June 2012, our consortium of ISRIC, FutureWater, and Nelen en Schuurmans started the project, financed by RVO-Partners for Water/NL. In September 2012, the official kickoff took place in Wuhan/Hubei Province. Leaders of the Yangtze River Commission and the CWRPI attended the ceremony. Also, the training of local staff and students started. We focused on the GWM&C concept, the WOCAT-SOTER databases, and our hydrological assessment tools. We selected the 12,000km2 Duhe basin to be our study area, as an important contributory source of water, located south-west from the Danjiangkou Reservoir. Together with our Chinese partners, the data needs were determined to build, calibrate, and validate our models. Our local partners successfully collected data for the project, which we combined with global data sets available.

Education & Training: ISRIC and FutureWater have accomplished three training events (two in Wuhan/China and one in Wageningen/Netherlands), in which some 28 core technical trainees were trained; 50 high level officers and distinguished  general experts from government, research institutes, and universities were well introduced  and some 150 people from various organizations were well informed of the GWM&C through training courses, kick-off meeting, workshops and so on.

Feasibility Study: To demonstrate the GWM&C concept to China, our Dutch consortium (ISRIC, FutureWater and Nelen-Schuurmans), in close cooperation with the Chinese partners, has undertaken a feasibility study in the Upper Duhe Basin around the Danjiangkou Reservoir in the Changjiang (Yangtze River) Basin, the largest river basin in China. The Danjiangkou Reservoir is the water source for the Middle Route Project (MRP) for South-to-North Water Transfer which will divert water from the Reservoir on the Hanjiang River, a tributary of Changjiang River, to Beijing City through canals along Funiu and Taihang Mountains. The MRP will mitigate the crisis of water resources in Beijing, Tianjin and North China, and increase irrigated area by 0.6 million ha, 6.4 billion m3 for municipal and industrial water supply, 3.0 billion m3 for agriculture, for Beijing, Tianjin, Hebei and Henan provinces, and significantly improve the biological environment and investment environment of receiving areas, and boost the economic development in China.

We have applied a GWM&C toolkit for the Upper Duhe basin. The toolkit consists of two simulation models, SWAT(Soil Water Assessment Tool) and WEAP(Water Evaluation And Planning system), and information and decision support system − Lizard.

SWAT is specifically applied to explore the impact of changes in green water management on runoff, groundwater recharge and erosion. We have performed the biophysical modelling of the soil and water management using the SWAT model for the Upper Duhe basin. We have quantified the GWC-measures and effects on hydrology and erosion within the basin, in both space and time. This leads to scenario development in case policy makers want to evaluate past measures or preview results of future measures to be taken, to e.g. generate more blue water and reduce sediment loads of Upper Duhe. The calculation results of this demonstration project for the five future GWC-interventions are plausible and mutual consistent. Based on the model calculations for the agricultural area, it can be concluded that for the overall Upper Duhe basin, the proposed GWC-measures will lead to further reduction of soil erosion and sediment loads to the streams.  The green water that is generated by the measures because of reduced surface runoff and increased groundwater recharge, leads to increased plant transpiration which is strongly related to crop production. This benefits the local farmer’s income, and does not increase the downstream blue water. The overall influence of measures taken in the agricultural area on the Upper Duhe basin as a whole is basically a matter of area, with agriculture covering less than 6% of the surface area. On the contrary, the forest land covers about 76%. Any significant measure taken in this area to decrease evapotranspiration and keep the erosion protection of forest land, will lead to increased blue water production for downstream use. Locally, improved agricultural practices by incorporating GWC-measures will lead to small changes in evaporation and transpiration, but to larger reductions of surface runoff, to less erosion, and to increased groundwater recharge.

WEAP links the upstream and downstream interactions and is particularly strong to evaluate and compare different scenarios, e.g. in terms of costs and benefits. We have applied the WEAP system to analyze costs and benefits of GWM&C-interventions in the Upper Duhe Basin using the output results of the SWAT model, costs of GWM&C-measures and water pricing. The quantification of costs and benefits leads to selection of effective and cost-efficient GWM&C-measures. For the Upper Duhe Basin, the WEAP model calculations result in a positive balance of cost and benefits for three GWM&C-interventions: stone lines, bench terraces, and contour tillage. Mulching almost reaches a break-even point at the moment. This means that the GWM&C measures  that we analyzed not only have a positive effect on green and blue water and erosion, but also gain positive financial effects. The return of investments on measures in the Upper Duhe Basin can be processed, based on these results.

We have developed a web-based information presenting and decision system for the Upper Duhe basin – Duhe Lizard Presenting & Decision System. The system allows all project partners to on-line view all the data and analytical results; and supports decision-maker to plan and monitor  implementation of green water management practices.

We found it very useful to face-to-face present our PvW-project results to Chinese stakeholders and get feedback for improvement of the results and discuss further cooperation in the pilot region and other regions of China as well. For that reason we had an extra trip to China during 27th October and 7th of November 2013. This trip was not planned in the contract of PVWS12001. Besides the project reporting in Wuhan, we attended a Workshop on Water Sustainability, Green Water Management & Credits and Rainwater Utilization – jointly proposed by ISRIC and Institute of Geographic Sciences & Natural Resources Research of Chinese Academy of Sciences (IGSNRR-CAS) and hosted by IGSNRR-CAS in Beijing; and visited Institute of Soil & Water Conservation, CAS on discussion on cooperation on application of Green Water Credits in Yanhe (Yan River) in the Loess Plateau. 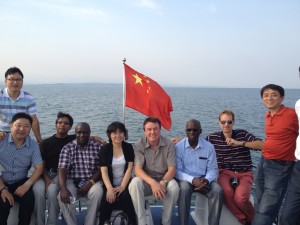 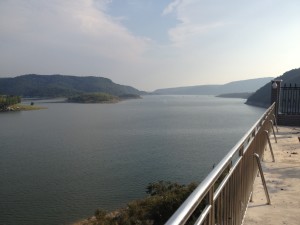