In strong cooperation with the Viet Nam Farmer’s Union (VNFU) International Cooperation Department, we have performed a mission to rural Vietnam. We were invited by the Viet Nam Farmer’s Union VNFU and sponsored by the Netherlands Water Partnership. This mission visited Vietnam from March 1-11, 2016. Objective of this mission was to identify the needs of VNFU on the topics of water and climate change and to find a common base for possible projects. Therefore, several meetings were organized with VNFU at the province level in Bac Lieu, Ninh Thuan, and Binh Thuan province, with government representatives of MARD and MONRE, and with delegates from knowledge institutes SIWRR and VAAS. In Hanoi, we also visited MARD, MONRE, VNFU-HQ, and the Dutch Embassy. Below, field observations are presented for different crops in different regions. In all regions, soil samples were taken to be analyzed in the Netherlands by Eurofins Agro. Results of this tests will be input for future technical training and soil improvement.

In the rice fields of Bac Lieu, influenced by brackish to salt irrigation water, we found rice plants under salinity stress. The rooting depth was limited to 0.2 m, negatively influenced by oxygen stress in the lower root zone. The soil structure of local clay soil of the acid-sulphur type is vulnerable to irreversible damage due to saline irrigation water.

At the shrimp ponds, production yields can be reduced by the intake of brackish water from the irrigation channels, that possibly contain water of bad chemical quality. The oxygen content of the pond water is raised by mechanically driven blades, sticking into the water. The pond depth is about 0,5 m, a water depth that can easily lead to high water temperatures under the Mekong Delta sun.

The dragon fruit plantation is the result of an earlier transition of rice-paddy’s into another agricultural crop. The soil is fertilized by some animal manure, brought out to the base of the individual plants. Both sprinkler and furrow irrigation is applied in practice. The soil structure clearly shows a compacted layer at 0.2-0.3 m depth, resulting from the rice crop. During the crop transition from rice to dragon fruit, the existing soil structure of the paddy has remained unchanged. In practice, this leads to a shallow rooting depth of the dragon fruit plant. This makes the plant vulnerable to drought, and when irrigation is applied, oxygen stress in the root zone might occur.

Another crop transition is from rice paddy to so-called chôm tree. This tree contains a medicine-type fluid, that can be tapped from the growing trees. The market price is interesting for farmers. At the chôm tree plot, similarities can be found as observed at the dragon fruit plot. Soil issues like structure and fertility, as well as the soil water regime are below optimal.

In the dry mountainous area, shepherds feed their cattle on the natural vegetation. Corn cannot be sown during dry periods, and grass growth is greatly reduced. Cattle may drink from the local water reservoir, from which only limited supply of irrigation water to downstream lands can be realized. Only little areas of corn sown before the drought are irrigated, due to the lack of sufficient freshwater. Especially poor farmer families are supported by the little irrigation water that is available in the region. In the region, rainwater harvesting measures are taken.

Down in the valley towards the coast, a grape orchard suffers from salinity stress. Being close to the sea, the shallow groundwater is brackish at a depth of <1 m below soil surface. In the area, freshwater is scarce and supplied by process water of a power plant in the upstream and upper Dalat region. In case during drought periods no surplus irrigation can be supplied, exceeding the water uptake by the plant, salt may enter the root zone due to capillary rise from the shallow brackish groundwater. Also, the nearby presence of salt mining farms can probably worsen the salinization problems in the region.

Asparagus is grown at the dune sand area near the sea. Soil and organic matter management is done by applying manure in rows between the plants, resulting in compost after mixing with the soil. The mixture is moved to the plant rows every three months. Alternating with manure at a time step of 15 days, chemical fertilizer is applied widespread across the field. The irrigation scheme is twice two hours per day, during early morning and late afternoon, supplied by sprinklers fed with local groundwater at 8-10 m depth below soil surface.

Local-scale water needs have to match with regional-scale water availability. Local-scale soils should be fit in both physical and chemical ways, to make successful use of fresh irrigation water to produce healthy crops. From our field observations and discussions with farmers, VNFU, SIWRR and VAAS, we will conclude on practical actions to be taken by farmers, VNFU-leaders, and irrigation managers at the district level. These actions will be integrated, due to the fact that soil, water, and crop need a chain-wise improved management at the same time, to lead to successful results at the farm scale. Part of the actions is training and capacity building of farmers and VNFU-staff, guided and coached by Vietnamese and Dutch experts, in close cooperation. In a parallel process, improvements on the regional-scale in terms of available water resources research and irrigation infrastructure and management should be performed. By doing this, both farmers and infrastructure will be at a next level of competence on time.

Practical solutions at the farm and district level should aim at and lead to a climate-change-resilient crop production, and to a higher income for farmers, based on improved crop production and crop quality. The regional-scale water availability now and in the near-future, is the framework to operate within. Technical improvements of the irrigation infrastructure system and management of reservoirs and channels should go hand in hand with enhancing the capacity of the farmers involved. 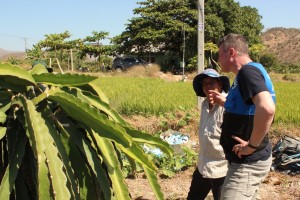 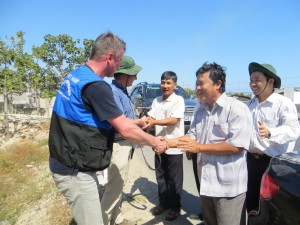 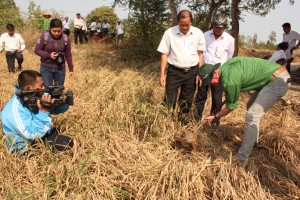 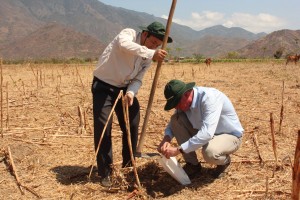 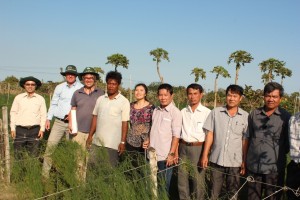 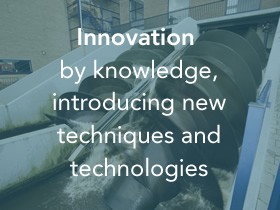 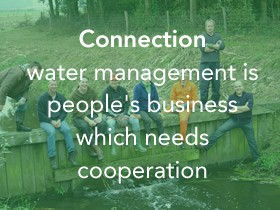